What is the Tier 1 capital ratio?

A bank’s Tier 1 capital ratio is its basic capital divided by its risk-weighted assets. Developed in its current form in the Third Basel Accord, also known as Basel III, financial institutions must maintain a Tier 1 capital ratio above a certain minimum to ensure they are protected against unexpected losses, such as those that occurred during the financial crisis.

What is Tier 1 capital?

Level 1 capital consists of the primary or core capital of a bank. This primarily means that reserves and common stock disclosed by the bank and non-redeemable, non-cumulative preferred stock may be included in certain calculation methods.

Tier 1 capital is different from Tier 2 capital, which is the additional capital of the bank such as loan loss and revaluation reserves, as well as undisclosed reserves. Tier 2 capital is generally less reliable or less secure than Tier 1 capital, and therefore should be considered separately when assessing a bank’s level of risk.

How the Tier 1 capital ratio is calculated

The Tier 1 capital ratio is a bank’s basic capital, as described in the previous section, divided by the total of its risk-weighted assets and expressed as a percentage.

The Basel Committee has set guidelines for risk-weighted assets, and the risk weight can range from 0% for assets such as cash to well over 100% for certain types of loans and loans. other exhibitions.

As a simplified example, suppose a bank has $ 100 in capital base and $ 2,000 in outstanding loans with an 80% risk weight. Therefore, the bank’s Tier 1 capital ratio can be calculated as follows:

In addition, there are two ways of expressing a Tier 1 capital ratio:

Under the Basel Accords, the bank’s minimum capital ratio requirement is set at 8%, and 6% must be in the form of Tier 1 capital. The Tier 1 ratio of 6% must consist of at least 4.5% of CET1, the rest coming from other forms of Tier 1 capital.

When Basel III requirements are fully implemented in 2019, banks will need to hold a mandatory “capital conservation buffer” equal to 2.5% of the bank’s risk-weighted assets, bringing the CET1 total minimum to 7% at this stage (4.5% plus 2.5%). In addition, regulators may require an additional capital buffer of up to 2.5% of risk-weighted capital, which must be achieved with CET1 capital, during periods of high credit growth.

As a concrete example, consider the following information from Bank of America‘s (NYSE: BAC) presentation of second quarter 2016 results: 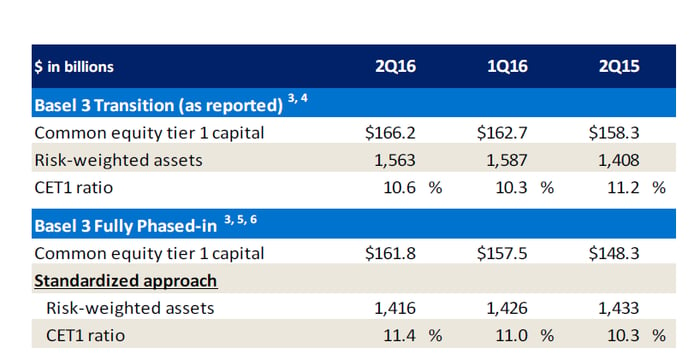 If you divide each of the listed capital amounts by its corresponding risk-weighted assets, you can confirm the bank’s calculations for its CET1. The bank is well above the minimum required. The term “fully phased in” is used because the Basel III requirements are currently under application and will be fully implemented in 2019.

This article is part of The Motley Fool Knowledge Center, which was created based on the wisdom gathered from a fantastic community of investors. We would love to hear your questions, thoughts and opinions on the Knowledge Center in general or on this page in particular. Your contribution will help us help the world invest, better! Email us at [email protected] Thanks – and fool!