Most popular religious places in Sikkim


Worshipers of nature for centuries, Sikkim revere mountains, caves, forests, rivers and lakes. It is home to some of the most picturesque Buddhist monasteries in the Himalayas, add to it temples, churches and mosques. Sikkim is indeed a paradise for those who lean spiritually.

Ganesh Tok-Hanuman Tok
“Tok” means temple. Dedicated to Ganesh and Hanuman, these two peaks near Gangtok are also known to serve as vantage points (weather permitting). Ganesh Tok (6,500 feet) is on a hill adjacent to the TV tower. According to legends, Hanuman Tok (7,200 feet), maintained by the Indian Army, is where the monkey god rested for a while as he carried the medicinal herb needed to cure Lakshman.

Thakurbari temple
One of the oldest Hindu temples in Sikkim, it was built on a plot of land donated by the Chogyal (ruler) in 1935. It was subsequently redeveloped for several years. Almost all of the deities of the Hindu pantheon find a place here through idols and murals. The brightly colored temple is located at the entrance to MG Marg, Gangtok. Durga Puja is the most popular festival held here.

St Thomas Church
The statue of the Virgin Mary (“Our Lady of Fatima”) kept in the cave, was brought from Portugal in 2017. Visit the church if you are in Gangtok at Christmas. The cheerfully decorated church is a delight.

Anjum-E-Islam
Located near the Gangtok taxi rank, the Anjum-E-Islam was originally made out of wood by a Ladakh Muslim, Sabila Sardar, who had acquired land from the local ruler. The trust of Anjuman-e-Islamia manages the mosque.

Do Drul Chorten
Built by the head of the Nyingma Order of Tibetan Buddhism, Trulshik Rinpoche, in 1945, this Gangtok-based attraction is one of the most important stupas in Sikkim. Inside are sets of mandalas of the meditative deity Dorjee Phurba or Vajraklaya, a set of Kangyur relics or holy books, and a full set of zung (mantras). Take a tour of the prayer wheels for spiritual help. The Chorten Lakhang has two huge statues of Guru Rinpoche or Padmasambhava. Hours: 8 a.m. to 6 p.m.

Enchey monastery
About 3 km northeast of Gangtok is 200-year-old Enchey. He belongs to the Nyingma order of Vajrayana Buddhism. The place was blessed by Lama Drupthob Karpo, a practitioner of Tantric Buddhism. The monastery observes many festivals, often marked by the Chaam or the masked dance. Pang Lhabsol held just before Losar, the Tibetan New Year (around February / March) and Losoong, the Sikkimese New Year (around December / January) are two of the most popular festivals with the Singhe Chaam once every three years. Hours: 4 am to 4 pm, Monday to Saturday; 4 am-1pm, Sun.

Rumtek Dharma Chakra Center
This monastery and learning center is about 24 km from Gangtok and belongs to the Kagyupa sect of Tibetan Buddhism. The new monastery was founded by the 16th Gyalwa Karmapa Rangjung Rigpe Dorjee in 1962, who took up residence in the former Rumtek Gonpa (located on a higher ledge) after leaving Tibet in 1959, according to records. The Golden Stupa contains his relics. The architecture of this four-story building is said to have been based on the Tshurphu Monastery in Tibet. Among the sacred objects kept here is a crown which is said to have been woven by the Dakinis (supernatural powers). Mask dances are performed here at religious festivals such as Saga Dawa (Birthday of Lord Buddha), Guru Trungkar Tshechu (Birthday of Guru Padmasambhava) and Gutor Chham on the eve of Losar (Tibetan New Year). Entrance with ticket. Hours: 6 a.m. to 6 p.m. 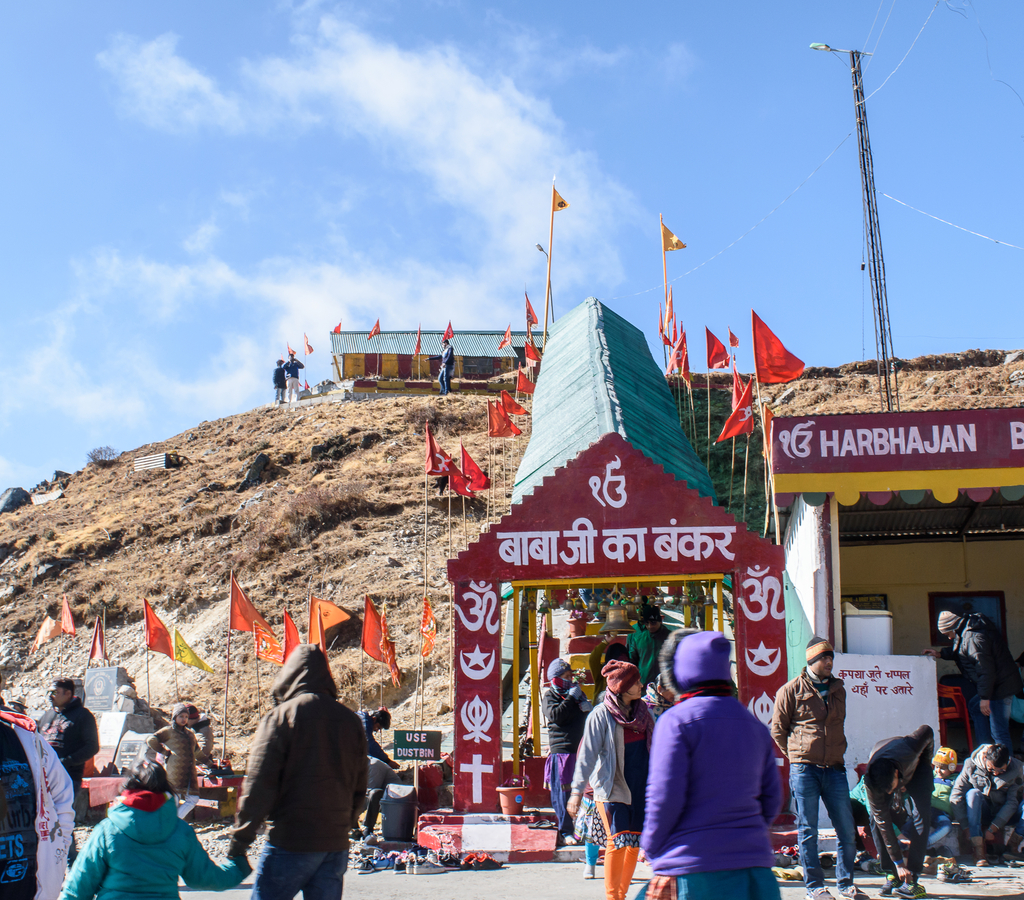 Baba Mandir
The new Baba Mandir (temple) dedicated to the late Harbhajan Singh, a soldier in the Punjab regiment, is usually seen in conjunction with trips to Tsomgo Lake and Nathu La (a pass near the Indochinese border). The original temple is located higher up in the Nathang Valley (part of the Sikkim Silk Road), near the bunker where the soldier was stationed. Local people and members of the armed forces stationed here believe his spirit protects them from danger.

Mosque of Barelvi
Located in Rangpo, a town on the border between Sikkim and West Bengal, it is part of the Barelvi school of thought in Islam and follows the Sunni Hanafi school.

Viswa Vinayak Temple
Opened in 2016, this sprawling temple complex is located in Rhenock, Rungdung, in the hills of eastern Sikkim. Built in an extravagant style, the four-story temple stands over 100 feet in height. On one side of the temple complex is a huge diorama depicting the story of “Samudra Manthan”. You can see this temple while walking the Sikkim Silk Road.

Parbateyswar Shivalaya Mandir
Located about 60 km from Gangtok, in Aritar, this temple is dedicated to Shiva. It attracts a lot of pilgrims during the monsoon festival. A short hike will take you to another temple called Mankhim Temple, worshiped by the Rai community.

Aritar Monastery
Located at one end of Lampokhari Lake, this monastery belongs to the Karma Kagyu sect. Lake Aritar (Ghati-Tso) is nearby. Also known as Lampokhari Lake, the emerald boot-shaped body of water at an elevation of 4,600 feet is one of the oldest natural lakes in Sikkim. Another interesting thing to check out here is a British era bungalow built in 1895.

David Walliams ‘would have become a teacher’ ...