KUALA LUMPUR (5 October): The gross impaired loan (GIL) ratio of the banking system increased slightly to 1.8% in June 2022 from 1.7% in June 2021, driven by an increase in the GIL ratio for banks. corporate and household sectors, Banking Data from Negara Malaysia (BNM) showed.

“The increase was driven by a small number of vulnerable households and SME (small and medium-sized enterprise) borrowers who were unable to resume loan repayments after exiting repayment assistance programs and defaults. of certain corporate borrowers,” the BNM said in its review of financial stability for the first half of 2022.

Among businesses, GIL loans from the banking system increased slightly to 3% for the corporate sector in June 2022 from 2.8% at end-December 2021, fueled by some borrowers who encountered difficulties in servicing their debts after leaving repayment assistance. 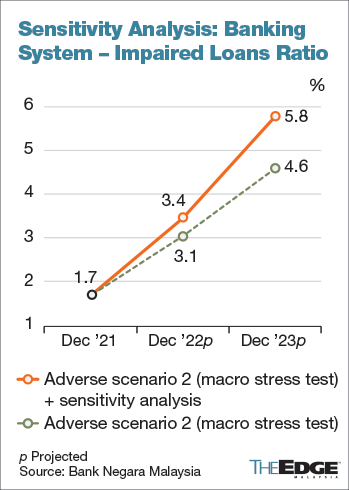 “The rise was mainly driven by borrowers in the construction, mining and quarrying, and wholesale and retail trade sectors,” BNM said.

The corporate sector GIL ratio increased by 2.5% in June 2020, based on data presented in the Financial Stability Review.

However, BNM said writedowns should be relatively contained based on banks’ leading indicators. He said the share of corporate loans with credit risk fell to 14.4% in June 2022 from 16.2% in December 2021, in line with gradually improving business conditions.

Meanwhile, the household GIL ratio also increased slightly to 1.2% of banking system lending to this sector, from 1.1% in December 2021, having remained unchanged since December 2020.

In the corporate and household sectors, the vast majority of borrowers who exited repayment assistance programs have however resumed servicing their loans, the BNM said.

BNM said that while rising interest rates and the cost of living could lead to a further increase in defaults for some borrowers in the second half of 2022, the increase in overall writedowns should be modest given the improvement economic growth prospects and labor market conditions.

As part of a sensitivity analysis to an adverse banking system scenario, which includes the ringgit performing worse than during the 1998 Asian financial crisis, BNM said overall writedowns could reach 5.8% by at the end of 2023, compared to 4.6% in a macro solvency stress test.